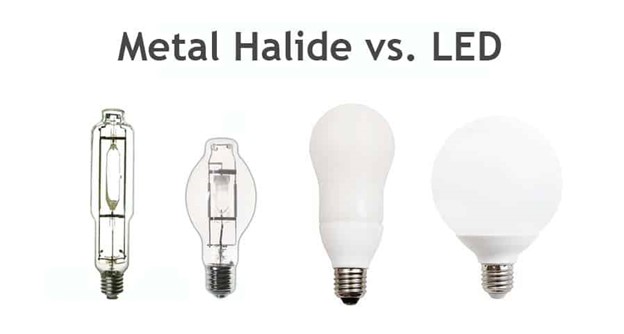 For decades, metal halide lights were said to be one of the best lighting options around. Not only are they more efficient than incandescent lights, but they also burn much brighter. However, as technology has evolved, other types of lighting may be a better option for you. What are we talking about? We are talking about LED lighting of course!

Today’s LED lighting has a lot to offer. If you are still using outdated metal halide lighting, you may want to reconsider. Below, our experts here at Action Services Group define the differences between the two types of lighting and explain why LEDs are superior in almost every way.

Before we compare metal halides and LEDs, it is important to understand what makes them different.

Metal halides work similarly to incandescent light bulbs. Encased in a thick glass, metal halides operate when an electrical current passes through a combination of metal and halogen elements, generating gas that creates visible light. Metal halides have long been the go-to lighting for areas that require high-intensity lighting, such as parking lots, pedestrian walkways, athletic facilities, and fields.

LEDs, short for Light Emitting Diodes, do not create a gas in order to work. LEDs, instead, use solid-state technology. Each shatter-resistant plastic lamp includes a built-in diode. This diode, which includes both a cathode and anode, creates a visible light when an electrical current is provided.

Both metal halides and LEDs are considered to be more energy-efficient than incandescent lamps. However, when it comes down to the numbers, the energy efficiency of an LED far exceeds that of a metal halide lamp.

A new 400-watt metal halide lamp is rated to last up to 20,000 hours. Selling points for this lamp also include a color temperature of 4000K and initial lumens at 32,000 to 36,000. This means that the initial light output is extremely high. However, metal halide bulbs tend to lose those lumens very quickly. In fact, it is not uncommon to see lumens depreciate by 20% within the first six months of use. In other words, that super bright metal halide will only produce 28,800 lumens after just six months of use. (Once used for 10,000 hours, a metal halide typically produces half of the initial lumens!)

By comparison, LED lights are directional. They do not waste lumens by spreading light everywhere, which helps to conserve brightness. However, even more to the point, LEDs retain at least 70% of their initial lumens throughout the duration of their lifespan. At approximately 100,000 hours, that means an LED not only stays brighter longer, it also lasts three to five times as long as a metal halide version.

For more on an LED’s lumen efficiency, read our blog Understanding Luminous Efficacy!

We understand that, for a business, what it comes down to is cost savings. So let’s take a look at two of the most important cost factors: energy and maintenance expenses.

Because an LED is more energy-efficient than a metal halide, it stands to reason that these lamps save you more money too. It is a fact that metal halides are more efficient than incandescent bulbs. So, there is a cost savings there. However, LED lights go beyond that.

We provided the example of a 400-watt metal halide above. However, at just 150 watts, an LED can burn even brighter! This means they consume less energy to produce the same, if not better, lighting than that of a metal halide. This means your power bill is reduced significantly through simply swapping metal halides with LEDs. It is an immediate cost savings that cannot be ignored.

Lighting maintenance is often overlooked when it comes to calculating your cost savings. Metal halides do not last nearly as long as LEDs. In fact, after a review of the facts above, it should be apparent that the lifespan of a metal halide depreciates rapidly. However, even if a metal halide lasted the full 36,000 hours, LEDs would still far exceed that. With between 100,000 and 150,000 hours of use, LEDs have a substantially longer lifespan. This means you will need to replace them less often than you would have to replace a metal halide.

Let’s not forget the other important part of selecting the right lighting for your business: the quality of the light being produced. After all, it is important to find a lighting source that protects your equipment, employees, and everything else your business may need.

That means even more cost savings. Why? Because your metal halides have to be turned on well before your workday begins to reach full illumination.

Both metal halide lamps and LED bulbs can produce high lumens. The main difference here is the depreciation rate. As we pointed out several times, metal halides depreciate very quickly. In fact, after six months you will already need to start looking into replacing them. However, LEDs can last years at the same lumen levels. At worst, they may have a 30% depreciation over the course of 100,000 hours, which is still significantly better than the lumen lifespan of a metal halide.

To learn more about LED savings beyond energy savings, try our blog LED Light Quality: What are the Advantages?

If you have been using metal halides, it may be time to switch to LEDs. Based on the cost savings, efficiency and quality – LEDs are superior light sources for almost every business. If you are considering making the switch to LEDs, contact Action Services Group at 800-223-0982 or email info@actionservicesgroup.com.

Your Options for an Industrial LED Lighting Solution

Topics: LED vs. Other Lamps