Home » Which Light Bulbs are Banned in Which States?

Which Light Bulbs are Banned in Which States? 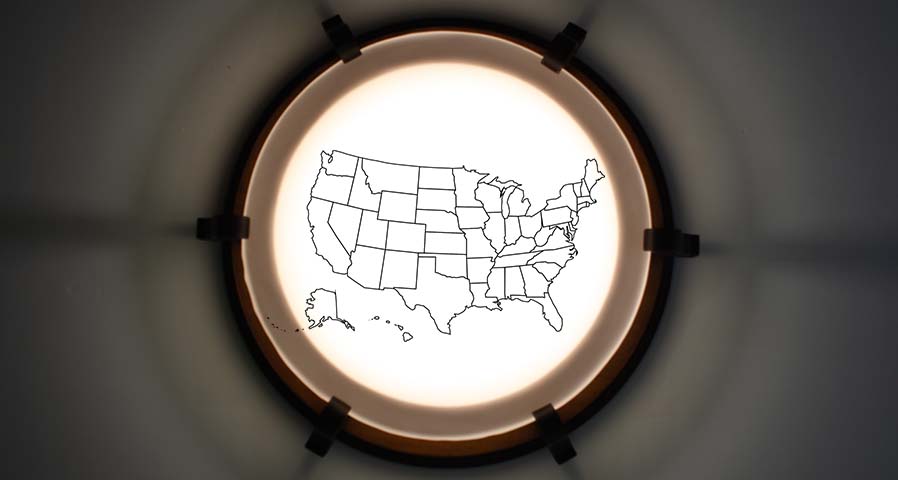 This is an ongoing series covering Light Bulb Bans across the U.S. designed to keep you up-to-date on what is available in your state. If you missed any of the previous blogs in the series, you can find them here: Light Bulb Bans Blog Series.

Certain types of light bulbs and lighting products are banned in some states but don’t expect the laws to be the same. Each state has specific restrictions, and the laws are constantly changing. It’s confusing when you are searching for lighting products or have businesses in multiple states.

Below we cover each state’s light bulb ban.

We have an entire series of blogs offering an in-depth look at current light bulb bans. While this blog reviews the individual states and their bans, to review the different laws that support these bans, we suggest reading Light Bulb Bans Across the U.S.

California is the first state to require all A-shape GSLs to be at or below 45 lumens per watt. The law passed in 2018 before the DOE enacted theirs.

How did California enact its ban when DOE legislation is still pending? They took their battle to court, even though the DOE has preempted all states from the GSL ban.  California’s lighting restrictions are outlined in Title 20. It requires all bulbs must provide more light than the power it’s using.

Nevada began banning some lighting products on January 1, 2021. It requires specific GSLs to have a minimum efficacy of 45 watts per lumen. Anything higher is illegal to sell in the state.

The ban only includes lightbulbs with a candelabra, intermediate, and medium base that includes the following,

There is an exception to the regulations. B10 candelabra base lamps above 40W can be sold through 2022. MR16 lamps are exempt from the ban, but linear fluorescent lights will be included at a later date.

The state is keeping up with California despite the ongoing lawsuit against the DOE. A recent advisory sent in March 2020, acknowledges the lawsuit but also warns the state will begin enforcing the new regulations.

The advisory from the state’s Department of Commerce applies to the following products,

At the start of 2023, Washington state’s ban on fluorescent bulbs also goes into effect.

The state’s ban on fluorescents went into effect at the start of 2021. It is illegal to sell any fluorescents with a CRI of 87 or more.

Currently, the state is suing the DOE over GSLs restrictions and does not have a ban on these products.

Fluorescent bulbs with a CRI higher than 87 are illegal on the island. The fluorescent ban took effect at the beginning of 2021.

Did you know we have an entire series of LED vs. Other Lamps? We cover the following comparisons: Induction Lighting vs. LED, Mercury Vapor vs. LED, LED vs Fluorescent Tubes, High-Pressure Sodium Lights vs. LED, Metal Halide vs. LED, and CFL vs. LED.

Vermont is leading the way on linear fluorescent bans. They are the first to enact legislation on July 1, 2020.

The state is also closely watching the lawsuit regarding GSLs. If the lawsuit favor’s the state, all GSLs must have a 45W minimum efficacy.

The District of Columbia’s ban on GSLs and linear fluorescents with a high CRI takes effect on March 16, 2022.

The following lighting products are part of the ban,

Washington D.C. is one of the state’s suing the DOE over its definition of GSLs.

Currently, Connecticut does not have a ban on any lightbulbs, even though lawmakers bring it up in sessions. The state is also part of the lawsuit against the DOE and is pushing for a ban on GSLs that don’t meet minimum efficacy standards.

The GSL ban is in effect as of July 8, 2021, and additional regulation is following. January 1, 2023, sees a ban on certain CFL, LED, halogen, and incandescent bulbs take effect. It includes medium screw base bulbs, along with shatter-resistant and three-way lamps. The ban also covers,

These lighting products are no longer legal to sell in the state.

January 1, 2022 will see a ban on some GLS and linear fluorescents go into effect. The state is waiting to see how the lawsuit against the DOE plays out before further restrictions are introduced. Currently, the ban includes,

Legislation on lighting restrictions is working its way through the state’s legislative process. New Jersey is modeling its restrictions on Washington D.C.’s example. The proposed ban will include some impact-resistant and high-CRI linear fluorescents, along with certain general service lights.

The state’s legislation on light bulb bans did not pass in 2021. It may be because the proposed ban differs from the one currently in the court system. Instead of requiring 45W GSLS, the state is looking at restricting general service lights without a minimum efficacy of 50 lumens per watt.

If the lawsuit against the DOE passes, it will negate New York’s proposed ban. All GSLs will need a minimum efficacy of at least 45 lumens per watt.

New York City is bypassing the state. By 2025, larger commercial buildings will be required to transition to LED lighting.

The Tarheel State has legislation banning some high-CRI linear fluorescent lamps and general service lamps, but the bill will not be addressed until January 2022 when the new legislative session begins.

Surprisingly, Oregon is behind other states. It has yet to pass restrictions on GSL or high-CRI linear fluorescent lamps. The restrictions were last discussed in 2020 after a vote on proposed legislation was boycotted.

The is considering restrictions on GSL and high-CRI lighting products. The first bill died during the 2020 legislative session, but a new one is in play in 2021.

Restrictions on some lighting products are currently being held in commitment. Lawmakers feel further study is necessary before the bill moves any further.

Next Steps for Those Looking for Banned Lighting

For those struggling to find specific lighting in states with bans, we suggest starting the transition to LED. There are significant benefits for organizations performing LED upgrades, you can review lighting-specific benefits in our interactive Lighting and LED Product Education Section.

Action Services Group has dedicated lighting professionals waiting to answer all of your lighting questions. Speak to one today by calling 610-558-9773, emailing [email protected], or schedule a call that fits your needs by clicking the button below.

Did You Know There Is an LED For That?

Where Did the CFL Go?

Pros and Cons of Selectable Color Temperature and Wattage LEDs

What is Dematerialized Lighting?

LED Streetlights Hurting Insect Population – There is an Easy Solution

Lighting the Way to COVID-19 Recovery: The ROI of LED Technology

“Action Services Group did an extremely professional job in retrofitting my store from fluorescent lighting to LED. I’ll be reducing my lighting energy costs by 60%, the lighting on our product is significantly better, and our customers love the difference. From the survey to the product selection to the installation they did a great job.”